Fracking – over to you!

Some astute politics by Labour and Tom Greatrex MP puts decisions on fracking very firmly in the Scottish Government’s court.

The Smith Agreement proposes the devolution of licences for gas exploration. The political significance is that the Scottish Government Energy Minister, Fergus Ewing, has used the UK government’s plans on underground access rights, to give the impression that he opposes fracking.

This is simply a political fig leaf, as I explained in an article last November in Utilities Scotland; “Scottish Government already has planning powers that could end the prospect of fracking in Scotland now. They have used these powers to stop new nuclear power stations, but not fracking. Simply put, Ineos are making this level of investment because they are confident that the Scottish Government is not going to stand in their way.”

Labour MP Tom Greatrex pressed home this point by lodging amendments to the Infrastructure Bill requesting that full powers over shale gas exploration be given to the Scottish Parliament ahead of the general election. The coalition government did not back this as such, but instead pledged to exclude Scotland from the impending legislation.

“The Tory-led Government have belatedly conceded Scottish Labour amendments to force the devolution of the remaining secondary parts of the framework for shale gas in Scotland, effectively implementing these parts of the Smith Agreement prior to the general election.

“Whilst some in Holyrood would like to pretend that the Scottish Government is powerless to act over fracking, the truth is that already nothing can happen at all in Scotland without the approval of ministers in Edinburgh. Their control over the planning and permitting regime gives the SNP ultimate responsibility and an effective veto for shale gas extraction in Scotland.

“But in the context of devolved planning and permitting regimes, it makes sense for underground mineral access rights, which are essentially a secondary aspect of the planning process, should be devolved as well. Labour have won a major concession from the Government on this point, who will now exclude Scotland from changes being made in the Infrastructure Bill.”

Of course Scottish Labour isn’t opposed in principle to fracking either and has instead said it cannot go ahead unless we have a system of robust environmental regulation and comprehensive inspection. However, they are not the government making this decision.

Friends of the Earth Scotland Director, Richard Dixon put it well in his recent opinion piece in The Scotsman: “Circumstances are conspiring to ensure that in the next few months, the SNP will have to come off the fence and either decisively stop the unconventional gas industry north of the Border or admit that they are happy to let big companies like INEOS drill and frack significant parts of Scotland.”

Indeed, when you run out of others to blame – for government’s, real politics can sometimes be very difficult! 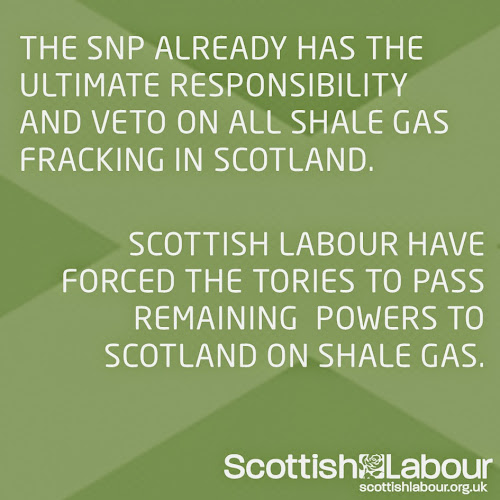