Energy profits and the failed market

Scottish Power profits have increased by 41% year-on-year in its generation and supply business for 2014. This comes after the Competitions Authority said the Big Six providers, including Scottish Power, were overcharging loyal customers by £234.

Iberdrola chairman Ignacio Galán had some interesting comments on offshore wind, he said: “One of our key priorities is to play a leading part in reducing costs for offshore wind and we believe that our large scale future projects in the UK will be able to deliver power at a significantly lower price than many people expect. We are looking to a future when offshore wind will be competitive with fossil generation, contrary to some expectations.”

In contrast Centrica, which trades as Scottish Gas, announced a 35% cut in profits. The retail business had a 20% cut in profits, attributed to lower retail consumption due to 2014’s historically mild temperatures. However, losing customers has also played a part in the weaker results.

The report by the Competition and Markets Authority (CMA) shows that the Big Six energy companies are charging their most loyal customers up to £234 extra a year.

Labour's Shadow Energy Secretary, Caroline Flint said: “Energy bills are £300 a year higher under the Tories. The number of families with children who cannot afford their energy bills is at a record high. Time after time, David Cameron has ignored warnings about rip-off energy bills, opposed Labour's plans to reform the energy market and create a tough new regulator, and let the energy companies get away with overcharging millions of consumers. Households and businesses cannot afford another five years of this.” 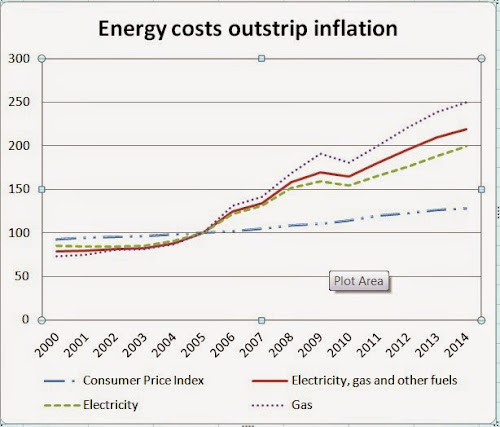 While true, Flint is not proposing to take radical action to break up the failed energy market. A market that has failed the most for the people who have the greatest energy need. Ofgem, the government regulator of the energy utilities is simply myopic and sees no other solution to the problem than providing even more market.

The Morning Star leader was typically direct, they said: “Ofgem's primary concern is not to advise Britain’s gas and electricity customers on how to obtain a better deal from their energy suppliers, but to maintain private ownership when even the dogs in the street know that the industry is one big racket.”

Philip Pearson at the TUC is more measured, but also points to the long term trends in his analysis. He says that customers who did not switch were more likely to be on low incomes, over 65, living in social housing and without qualifications. Customers on Standard tariffs were also more likely to be disabled, a single parent and struggling financially.

The CMA report has made it abundantly clear that the corporate-controlled energy system isn't working and we need a radical new approach.