Cruachan Power Station and those who died

On the 50th anniversary of the opening of Cruachan Power Station, we should remember not just the amazing engineering achievement, but also the 36 men who died building it and many others who perished as a consequence of working there.

Cruachan Power Station, in which the power to top up the National Grid is stored, is celebrating its 50th birthday today. It's pumped storage system ensures there is also enough power at times of peak demand on the grid. A dam was built in a corrie on the summit of Ben Cruachan as a reservoir for turbines in a massive cavern excavated inside the mountain. At times of low demand the turbines act as pumps drawing water back from Loch Awe up to the reservoir. 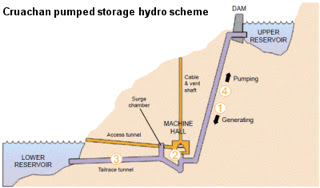 If you drive down the main road to Oban you can easily miss this major power station, marked only by the visitor centre. This is ironic given the campaign against the scheme mounted by the Scottish Landowners Federation at the time. It also provides a fabulous, if challenging, walk over what is known as the Ben Cruachan Horseshoe – 8 hours to cover 8 miles with seven summits! It was many years ago that I walked it, but my muscles still twitch at the memory! There is a much shorter, but still pretty steep climb to the reservoir, on a path about 100 yards east of the visitor centre (OS Pathfinder Guide 31 – Walk 27).

A 4,000 strong workforce was drafted into Argyll to hand drill their way into the bowels of Ben Cruachan to construct the cavern – nicknamed the Tunnel Tigers.

ScottishPower took a small group of surviving workers back to the site for the anniversary. One of the workers, John O'Donnell now aged 76, described the conditions:

“Thirty six men died in the construction phase but many, many, many more died with illness afterwards, including my brother, who died from emphysema. There was no health and safety then, that is the reason I am wearing a hearing aid now, and we never had anything, no goggles, no oil skins, just a helmet.

Nobody was ever born in a tunnel, you had to learn. It was absolutely amazing that more workers weren't killed, because we were working with electrical detonators and we were drilling with water because we couldn't dry drill. I would imagine over 100 have died later from emphysema. We were all mad, you had to be. I would never go down today.”

There are a few lessons for today.

Firstly, this is the health and safety 'monster' culture David Cameron would take us back to by deregulating safety and slashing staff in the HSE – not to mention undermining safety representatives in the Trade Union Bill.

Secondly, the importance of planning and public ownership in the energy sector. The scale of hydro developments in the Highlands would not have been achieved in the so called energy market. It took a visionary Labour politician, Tom Johnston, to drive the plan forward. Despite the nimby's of his day!

Thirdly, in the context of immigration scare stories it is less well known that much of the labour force for the early hydro schemes were displaced persons. It is Germans, Poles, Latvians and many others that we have to thank for electricity in the Highlands.

So, let's celebrate a major engineering achievement, but also commemorate those who died in order that we can switch the kettle on at half-time.

There are a couple of books worth reading if you want to know more. My favourite is Emma Wood's, 'Hydro Boys', and also 'The Dam Builders' by James Miller which is well illustrated.