Let’s not fry the planet to oblivion

The monsoon rain that hit Scotland in recent days should be a stark reminder that we need to take responsibility for climate change. As today's Scotsman editorial elegantly puts it; “It’s time we stopped pillaging the earth’s finite resources to create short-term gain for the few at the expense of the many.”

The Met Office gave us a clear warning yesterday with global temperatures set to rise more than one degree above pre-industrial levels. This means the world is half way towards 2C, the gateway to dangerous warming. It is to be hoped that this new data will add urgency to political negotiations in Paris later this month aimed at securing a new global climate treaty. But I wouldn't hold your breath!

In Scotland, we have ambitious, world leading climate change legislation, but have yet to meet any of the interim targets. As my old gran used to say “promises butter no parsnips”. The climate change equivalent might be; “Ambition won't save the planet”.

The Stop Climate Chaos Scotland coalition has recently published a manifesto for next year's Scottish Parliament elections. We have been taking its proposals around the party conferences in recent weeks, with well attended fringe meetings and lots of interest from delegates. At each event party spokespersons have been broadly supportive, but more cautious when it comes to detailed action. All the party leaders have signed a commitment that their manifesto's will be consistent with the ambitions of Scotland’s Climate Change Act.

I was speaking at one of these events on one of the more challenging policy areas, transport. Transport accounts for a quarter of Scotland’s greenhouse gas emissions, but is the area of least progress, both in policy and in emission reductions.

We need to make a significant shift to public transport by disincentivising the car where alternatives exist. That's because cars are the largest source emissions, 40% of the total, and road traffic miles are forecast to increase by 25% between 2002 and 2020.

An active travel policy with greater emphasis on walking and cycling also has obvious health benefits. Not to mention the 2000 deaths per year from air pollution.

Then we have air travel. Air Passenger Duty is soon to be devolved and almost all the debate has focused on reducing it. Air travel is the highest emitter per passenger kilometre – domestic flights in particular. A 50% cut in APD would put an additional 60,000 tons of CO2 into the atmosphere.

Again, it's also a social justice issue because half the public don’t fly. They rely on other forms of transport that don't operate on a level playing field with air travel. Air travel is exempt from VAT and aviation fuel is tax free. Lower carbon train fares and bus fares are going up rapidly.

Credit to Kez Dugdale for highlighting the cost of cutting APD in her conference speech. Supporting low paid workers through tax credits, is a better use of the tax revenue than promoting more polluting flights.

The Met Office data means action on climate change is more urgent than ever. There will be no where else for our children to go once we have fried the planet to oblivion. We should make some big strides in Scotland next year by facing up to difficult policy change like transport. Not just for the environment, but for social justice as well. 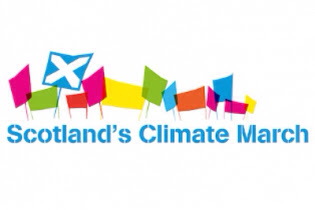