There is broad cross party support for Carbon Capture and Storage (CCS) as an important component of our climate change strategy. The problem is turning policy support into action, in our so called energy market.

I was in London today, participating in an interesting discussion on these issues. I have spent some time, with others, over the years trying to persuade a string of energy ministers and energy companies to adopt CCS, with little success.

CCS is the process of capturing and storing carbon dioxide (CO2), typically caused by burning fossil fuels in power generation and heavy industries, before it is released into the atmosphere. It can be used post-combustion by capturing the gases, or pre-combustion, which involves converting the fuel into a mixture of hydrogen and CO2. It generally captures around 90% of emissions.

Once the CO2 has been captured, it is compressed into a liquid and then pumped underground to be stored into depleted oil and gas reservoirs or coalbeds. Something we have plenty of in Scotland and the North Sea. 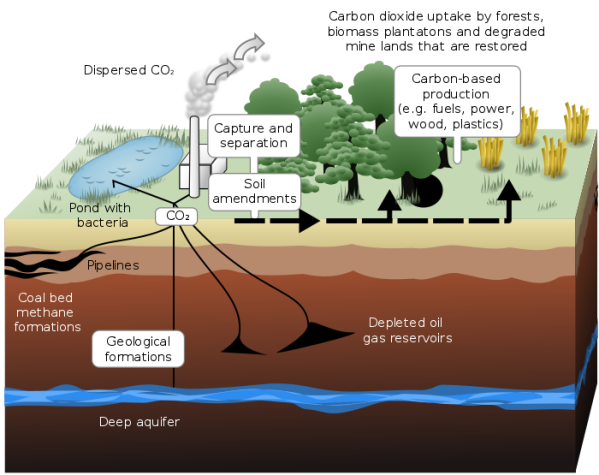 The CO2 can be used to produce commercially marketable products, known as carbon capture storage and utilisation (CCSU). Some are reasonably well established like enhanced oil recovery (EOR). Others are still being researched.

CCS is the only technology that can help reduce emissions from heavy industries – essential for tackling climate change. When combined with bioenergy technologies for power generation (known as BECCS – bioenergy with carbon capture and storage), CCS has the potential to generate ‘negative emissions’, removing CO2 from the atmosphere. The potential downside is that these technologies can be expensive, at least until scaled up.

Some environmental groups are concerned that these technologies will be used as an excuse for climate change inaction, or to allow companies to continue to burn fossil fuels. However, the IPCC report published this week is clear that we may not be able to limit warming to 1.5C without removing carbon dioxide from the atmosphere, and that means CCS. We certainly cannot afford to close it off as an option.

There are more than twenty large scale CCS plants globally. In the UK, a £1 billion competition to develop CCS was dropped in 2015 after a long delay, losing the UK’s early research advantage. The Clean Growth Strategy of October 2017, renews a commitment to the technology, with promised investments of up to £100 million. As the Permanent Secretary at the energy department put it giving evidence to MPs earlier this year:

“We think it is very likely to play an important part in the overall effort to decarbonising the economy at the lowest cost. Lots of international studies, as well as our own studies and scientific work here, show that CCUS is likely to be a key part of the overall solution.”

However, he went on to say:

“This is much more about innovation. We are not, at this stage, talking about actual deployment of a live, fully functioning, fully scaled CCS project.”

In other words, little actual action to create the scale we need to meet climate change targets. There is a small stick involved in energy generation – by 2025 the government will phase out coal burnt in power plants not fitted with CCS.

The Scottish government is supportive of CCS in its energy strategy, but it isn’t in a position to fund a full scale project. It is to fund a feasibility study – the Acorn Project aims to create a CCS project at St Fergus in Aberdeenshire. It is also supportive of developing Hydrogen, primarily as a replacement for gas used in heat, plus some transport options. Hydrogen gas at scale will, at least initially, require natural gas (methane) as the source feedstock and as such in order to be low carbon, CCS will be a necessary system requirement.

It seems clear to me that CCS remains an essential component of any climate change strategy. Scotland is well placed to take a lead, but this has to be on a much larger scale than is currently envisaged. A collective international effort is also needed to speed up research, development and deployment of CCS.

The U.K. Government has a key role to play, but it appears only to be interested in tinkering around the edges. The failed energy market will simply not deliver on the scale required. So, it is time for a planned energy strategy, with public ownership at its core, that can take the necessary action.